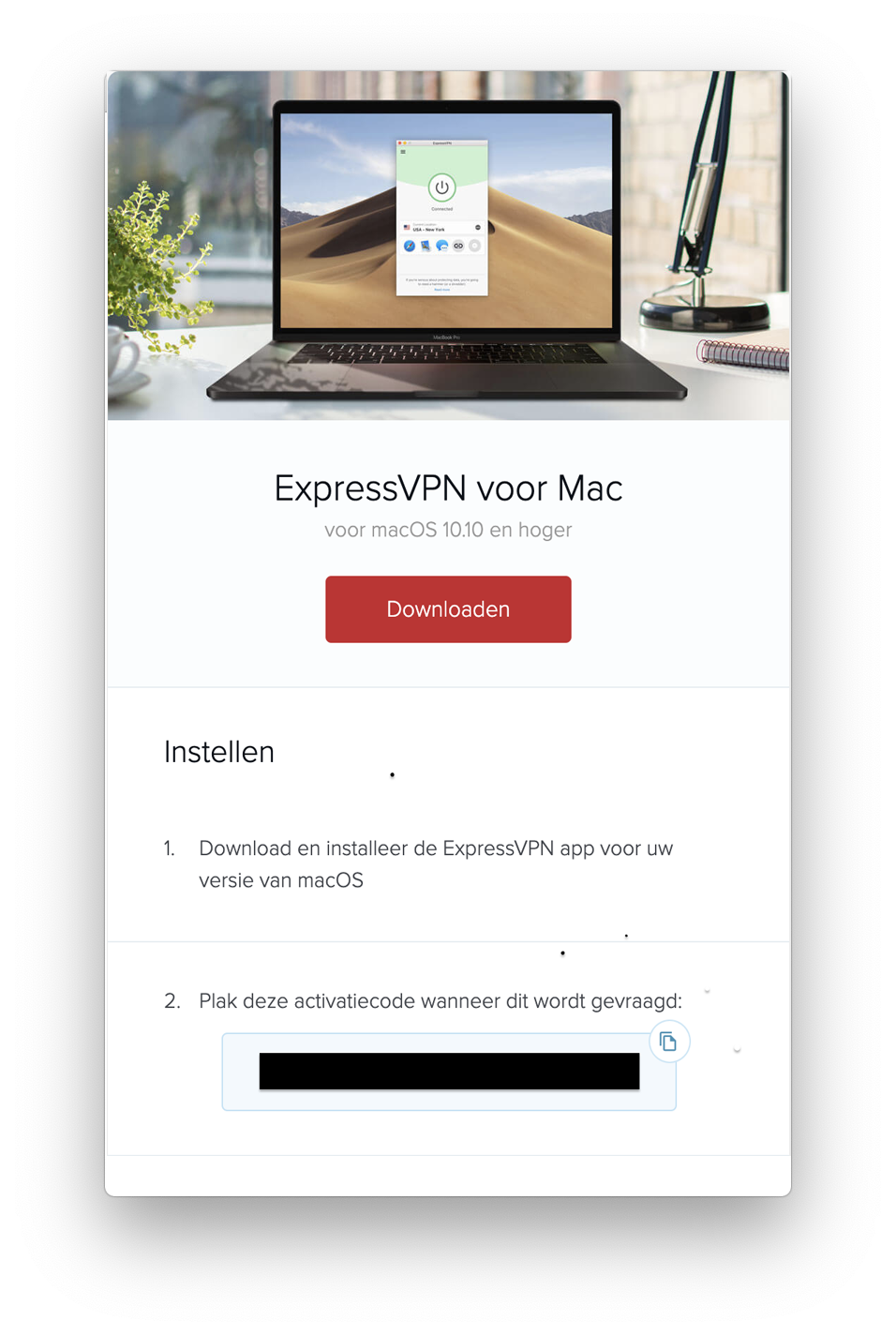 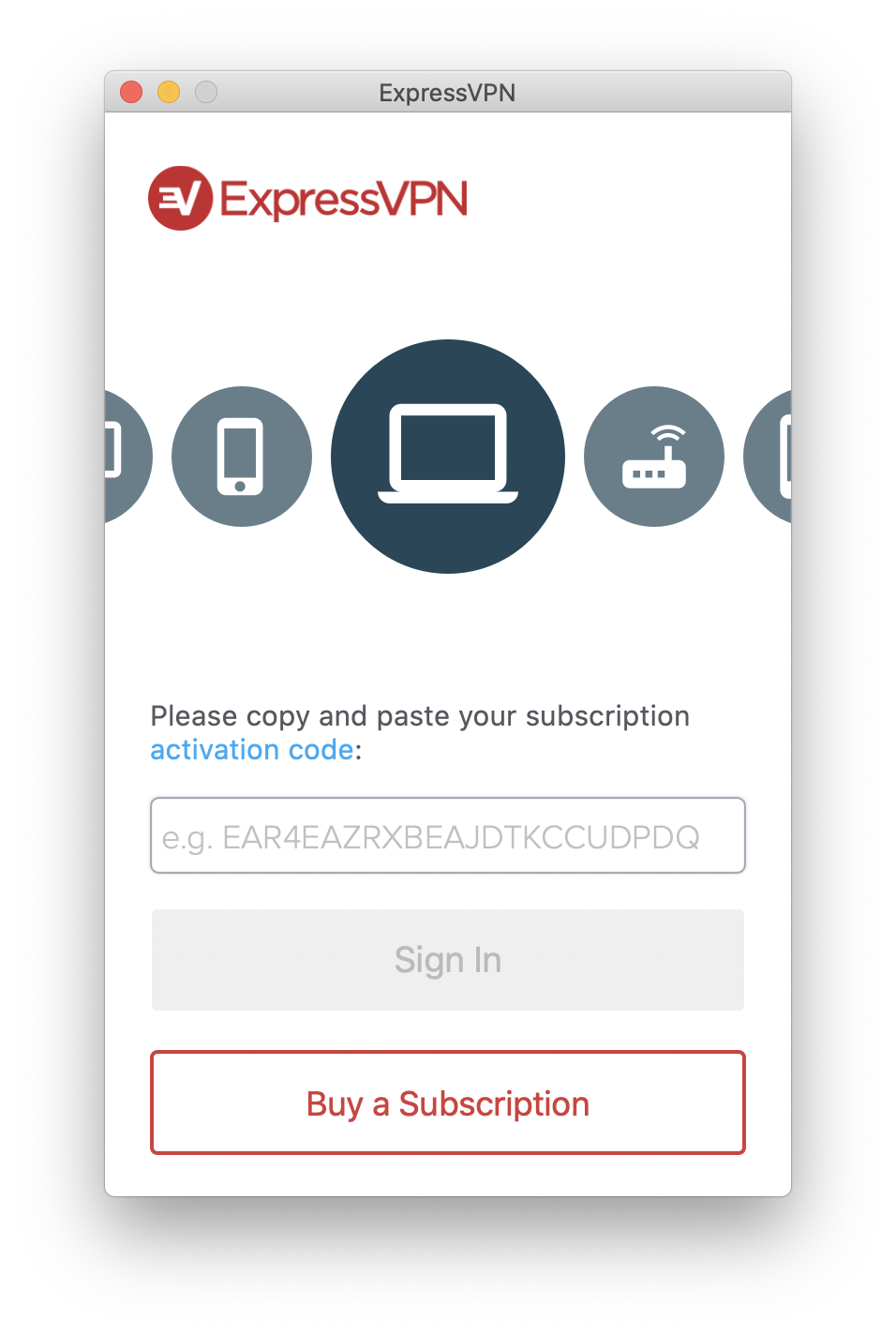 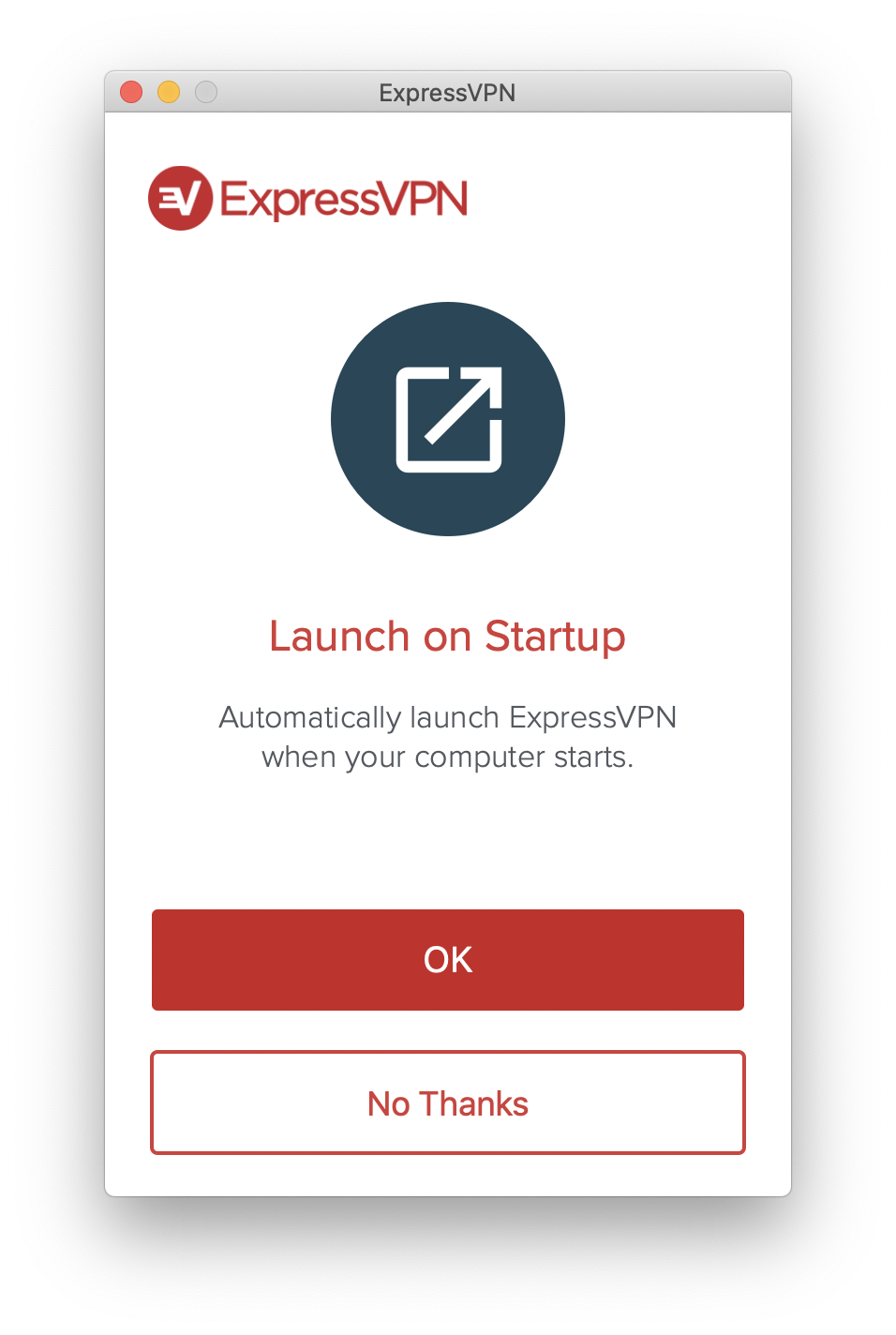 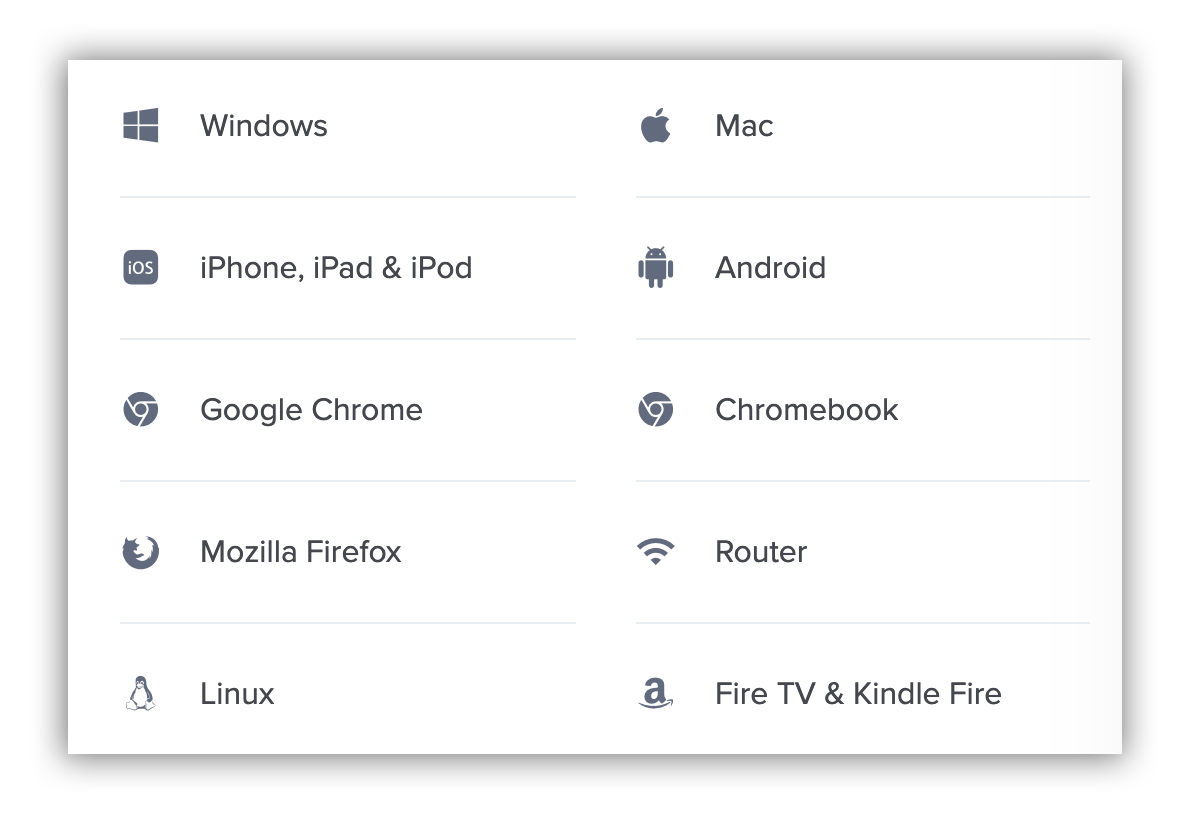 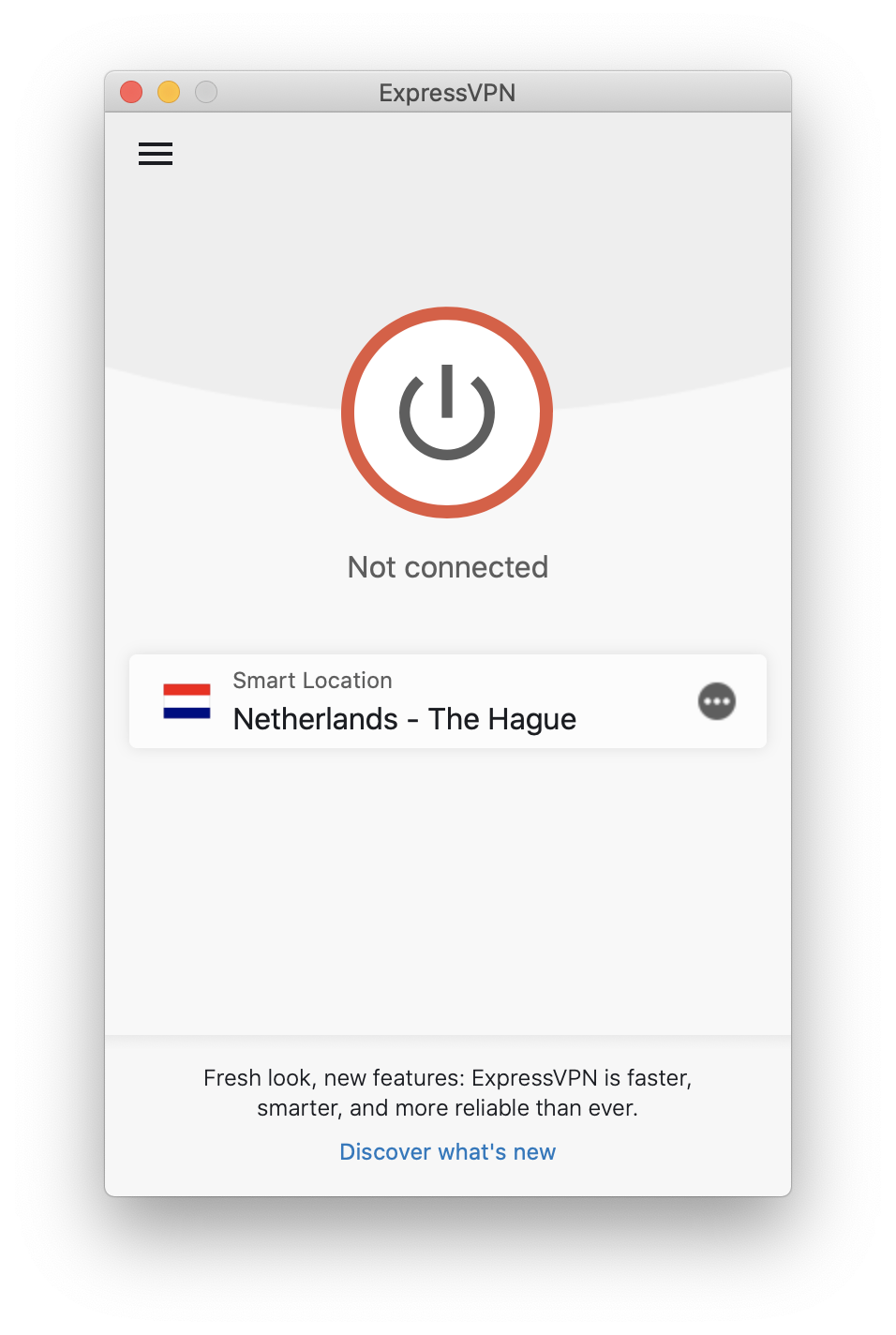 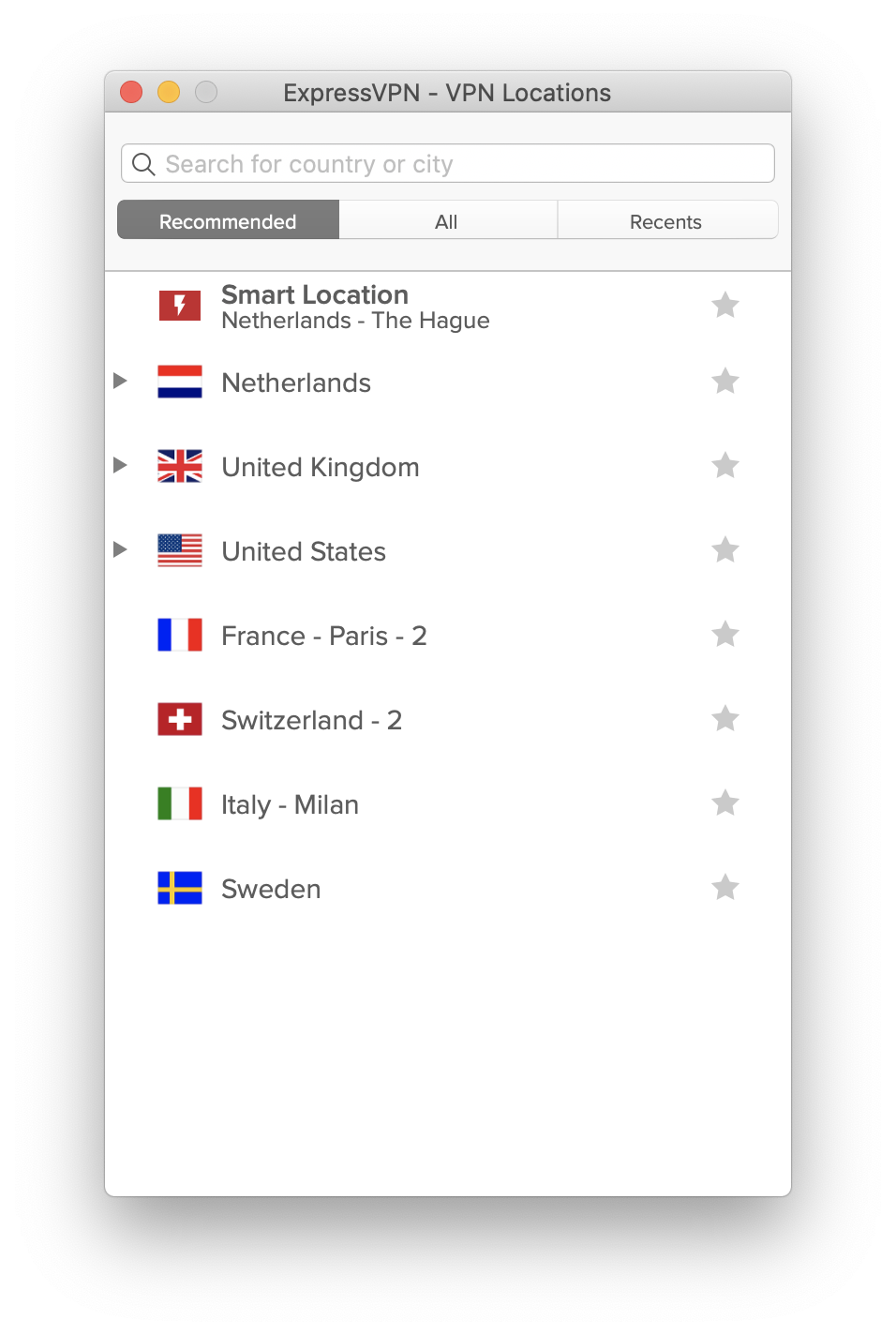 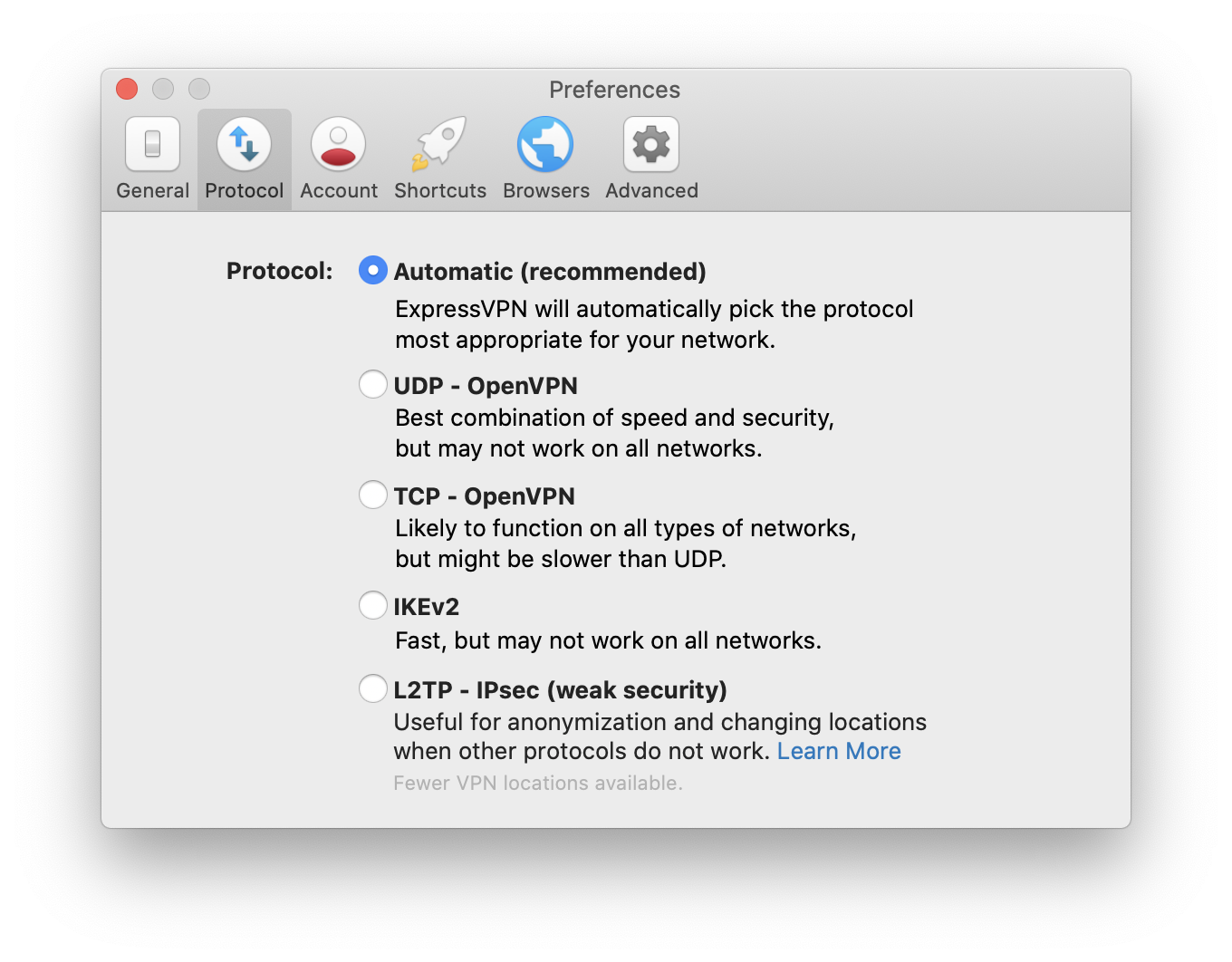 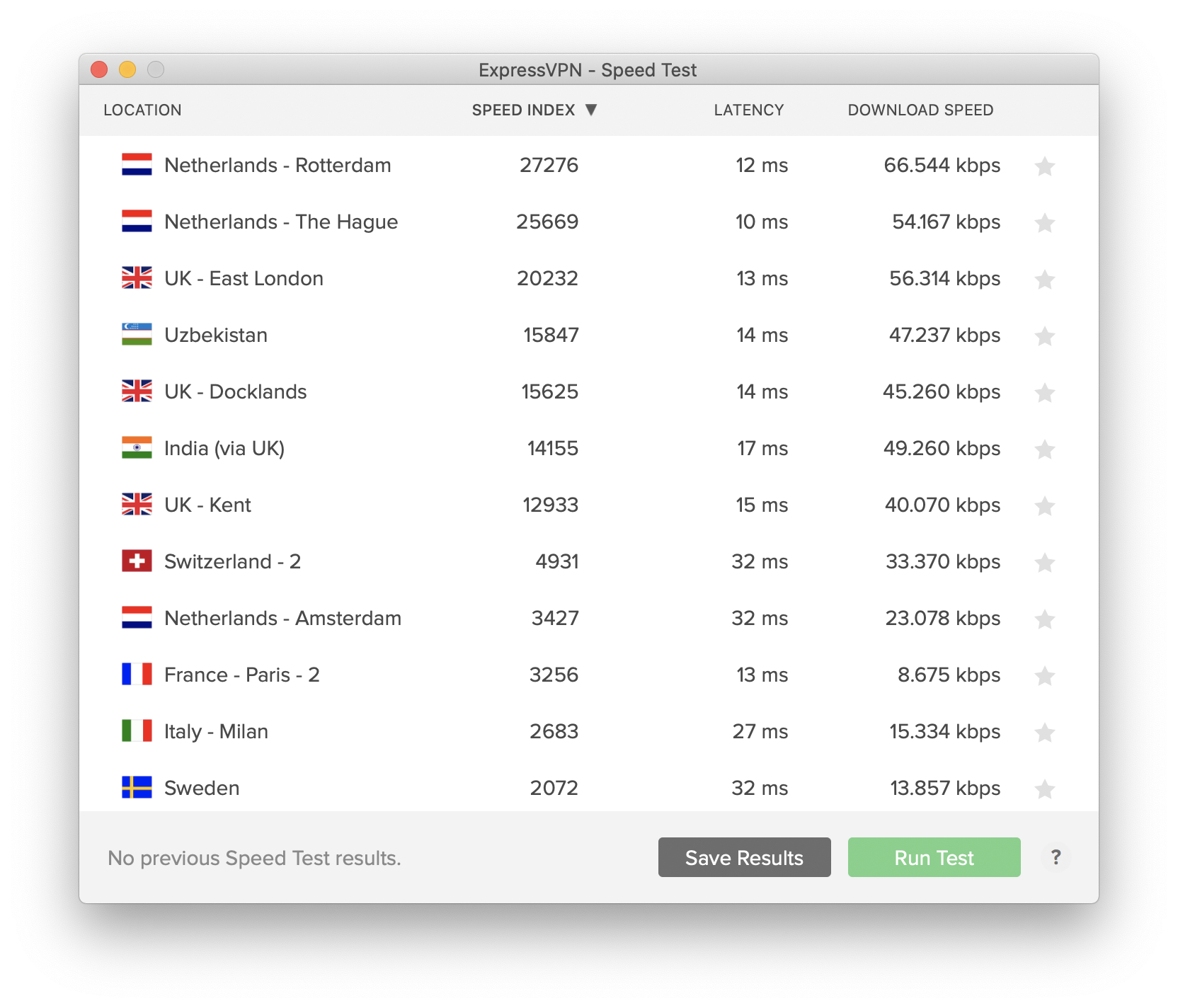 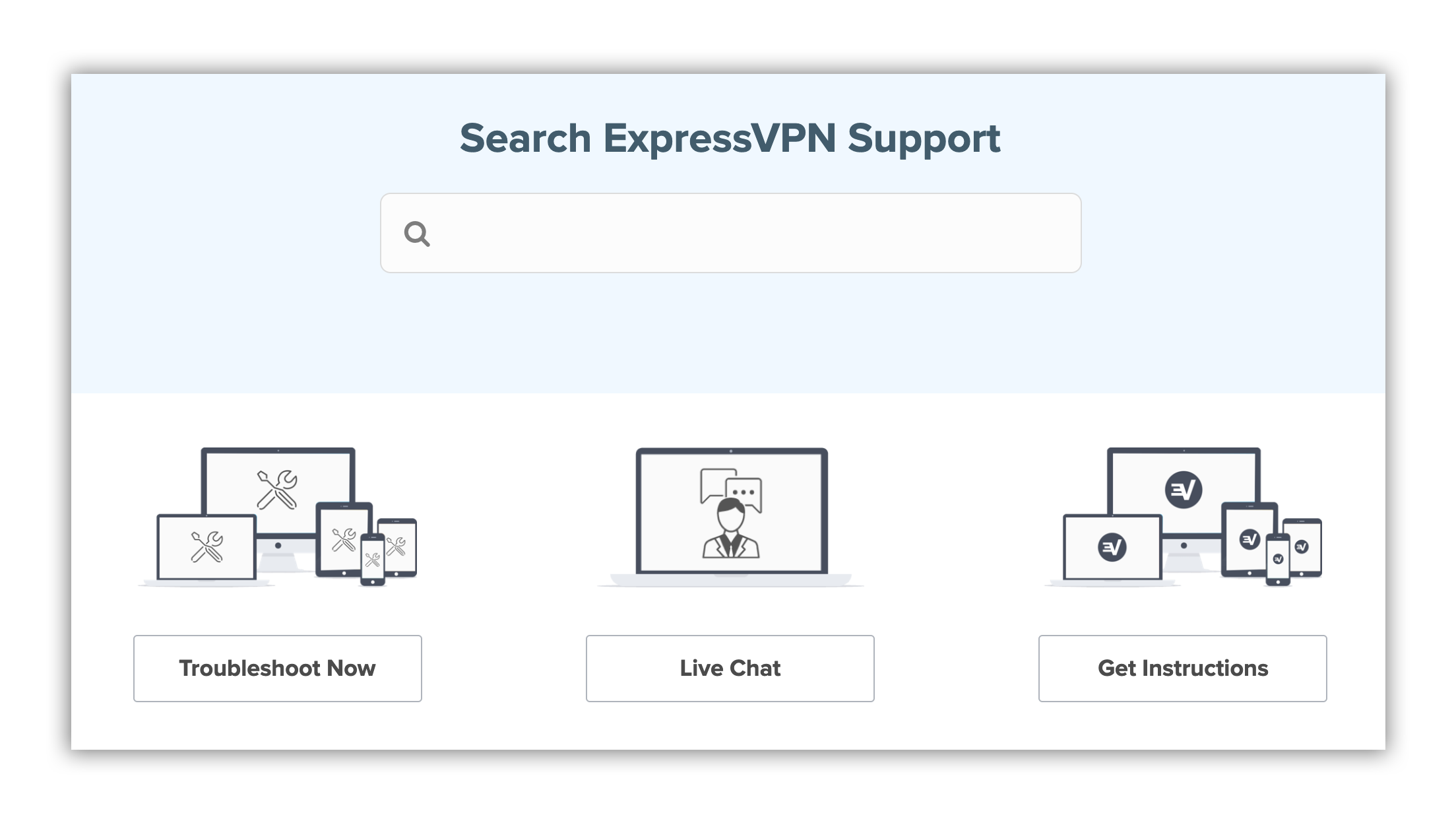 I m using ExpressVPN From Few Months now ... & i m really satisfied Its very quick To connect & Give really high speed even for downloading ... And ExpressVPN Also Works Great With Streaming Services like Netflix or Primevideo ... Its gives really good Experience & Unblock all sites really well .

ExpressVPN has been my go to while overseas for work. It allows me to still watch Netflix, and access websites that I would not otherwise be able to. All in all they may have gotten their lifetime customer out of me. I highly recommend it for anyone traveling overseas, and even if you are stateside it is still very useful practicing sites and protecting your data and privacy.

ExpressVPN not only helped me during my 3 years in China,but also after my return to Europe, because you can get past the various protectionistic efforts which some countries run on a national basis. But just as important, if you have a problem with ExpressVPN, their service staff is second to none!

Express VPN does what it says it will do.I feel safer usung it.No spying on you from anyone.Great product.

Best VPN available. Maybe their price is expensiver than other providers but their no-log policy was confirmed and their servers are the fastest.

I have used Cyberghost for a few months....then I used NordVPN for another 2 months...and ExpressVPN blew all of them out of the water. Been on ExpressVPN for 3 months now and loving it! Torrents are fast, web browsing is awesome. I couldn't give 5 stars as there has been a handful of slowdowns on my nearest server in my country...but once changing to UK or France it was fine, and then changing back the next day it was full speed again. Also after running all the tests on this site here: www dot stationx dot net/browser-privacy-security-and-tracking-test-sites/ ExpressVPN covered everything....not one leak of info....not one errant DNS misdirect....nothing! I unfortunately cant say the same for Cyberghost or NordVPN. Don't hesitate....investigate.....and you will come to the same conclusion.

I'm currently stationed in Germany and It Is so hard to watch my favorite shows or listen to my favorite music over here without VPN Express. Plus the added protection it adds is just icing on the cake! Literally to get it to work you install it and press a button. Easiest app I've ever used too, I use it every day! Love it!

These are the best features of ExpressVPN for Android phones: 1) Unparalleled customer service – not just compared to other VPN providers, but compared to virtually any other company that I've ever dealt with. They really go the extra mile; and when they say they strive for 'complete customer satisfaction', they actually mean it! Their 24/7 live support is phenomenonal – the wait time is hardly ever more than 5 minutes (often it's under 2 minutes). 2) Overall, very fast speeds. Not necessarily THE fastest, but right up there as one of the fastest. Moreover, their servers are consistently fast over long periods of time and across many countries. 3) Capable of defeating all geo-blocking! They're one of the few VPN providers left standing that are able to give users access to BBC iPlayer (I personally use BBC iPlayer as the litmus test for any VPN, rather than Netflix), after the BBC launched a fanatical crackdown on VPNs at the beginning of 2018. On the rare occasions that I find I'm blocked, their 24/7 live support can normally advise which alternative UK servers are still working. ExpressVPN is also one of the few VPNs that I've tried that works with Amazon Prime Video (their major US servers usually work – once again, on the rare occasions that I find I'm blocked, their 24/7 live support can normally advise which alternative US servers are still working (if none are working – which almost never happens – then the downtime is no longer than 48 hours)). 4) ExpressVPN use their own private & encrypted DNS resolvers – a really big factor w.r.t. Internet privacy. Encrypted DNS queries are the most overlooked factor in Internet privacy – in fact, it kind kind of defeats the purpose of using a VPN if your DNS queries aren't encrypted! Moreover, ExpressVPN have an outstanding 3-in-1 button on the app that allows users to have total peace of mind: a check of your spoofed IP address (with confirmation that you're connected to the correct ExpressVPN server); a DNS leak test; and a WebRTC leak test. Many other VPN providers make users rely on 3rd party software tools if they wish to check this important information. 5) The term 'military grade encryption' (a meaningless term that drives me nuts!) is bandied about by practically every VPN provider on the market – but in the case of ExpressVPN, they simply use the highest standards of encryption currently available. This means OpenVPN using AES-256 (TCP and/or UDP), coupled with SHA-512 & RSA-4096. (I certainly don't pretend to fully understand the technical aspects of encryption protocols! However, from reading layman's guides to this difficult-to-understand area, I'm able to grasp the general gist of it – and I know that the encryption protocols summarised above are extremely strong indeed). Furthermore, ExpressVPN employs Perfect Forward Secrecy – another big factor in its favour. PFS is a little easier to understand than the encryption protocols themselves. What it means is that in the highly unlikely event that the NSA (or some other adversary) was able to break the encryption code, they would NOT get very far – they wouldn't be able to decrypt any data from past sessions; nor would they be able to decrypt your Internet traffic for future sessions. (That's because ExpressVPN automatically negotiates a new secret key every 60 minutes – this 60-minute re-keying process guarantees your “forward secrecy,” so the most an adversary could obtain, if they managed to compromise your keys, would be up to 60 minutes worth of data). 6) Last, but not least, are the logging policies of ExpressVPN. The topic of precisely what VPN providers in general log (merely claiming to be a 'logless VPN' should generally be taken with a grain of salt, unless further evidence is provided and/or the VPN provider's privacy/logging policy is clearly & unambiguously spelt out); and what any particular VPN provider logs; generates more heated debate/discussion than other aspect of a VPN service. [Readers might want to consult Comparitech's overview of this issue – published by Aimee O'Driscoll on August 19, 2018 under their VPN section]. In a nutshell, ExpressVPN engages in no logging activities that would be of concern to the vast majority of users (they're logging policy is readily available for potential users to scrutinise before signing up). None of ExpressVPN's servers stores any data that would enable anyone to link online Internet activity with specific, individual users. Most importantly, a user's real IP address is never logged under any circumstances. Are there any downsides to ExpressVPN's Android app? There's a few worth mentioning. Firstly, ExpressVPN desperately needs a 'kill switch' – it's a significant feature that's lacking and is long overdue. Secondly, the Android app has a rather disconcerting 'feature' which results in a user's Internet traffic temporarily being unencrypted whenever the user connects to a different server, or even switches from a WiFi connection to mobile data (and vice versa). Thirdly, whenever the VPN connection drops (which might occur once or twice every few hours), no alert is given to the user to inform them of this fact. I, for one, have been horrified occasionally to discover that several hours have elapsed after a VPN drop-out: all that time spent with my Website traffic 100% visible! None of these flaws exist in the Windows version of ExpressVPN, and I can only hope that they'll be rectified on the Android version. Finally, yes – ExpressVPN is darn expensive (but not obscenely so). I encourage potential buyers to make use of the '15 months deal' offered by ExpressVPN (I can't provide a specific URL, but you won't have to look very far before you come across it). So far, I've made good use of this deal twice – so I've qualified for a total of 30 months subscription for the price of 24. Overall, ExpressVPN is outstanding. I give it a score of 9/10. [I certify that this is an honest and forthright review – and no incentives whatsoever were offered by ExpressVPN].

Express VPN is by far the best VPN I have tried so far. It is the most reliable, at least for China, which is the country where I live. I have tried many others, but Express is faster, way more stable, and whenever I have an issue, the guys of the support chat are always available to help me. Yes, it is a little more expensive than other VPNs, but ultimately, it is worth it to spend few more bucks to ensure you can always use it.

I am Tim I have been using express vpn for 3 years in China and it has proven to be a reliable and fast vpn 99% of the time. I have tried other vpns but none have come close to the reliability and speed of Express vpn. They have excellent customer service with staff that can quickly resolve any issues. I would recommend to anyone thinking of a vpn service to try Express vpn. Thanks Express vpn Tim